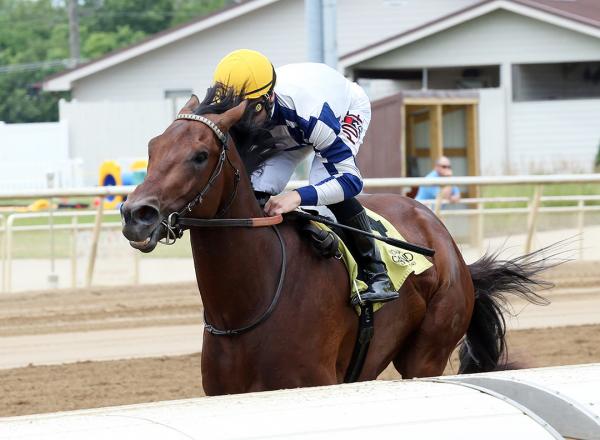 The 92nd Canadian Derby drew a sizeable field of 11 horses on Saturday at Century Mile. However, the 1 1/4-mile race for 3-year-olds boils down to Myopic, Tony’s Tapit, and Uncharacteristic.

The Grade 3, $125,000 Canadian Derby is supported by three $75,000 stakes with the best field of the four races being the Northlands Distaff Handicap for fillies and mares. The Distaff goes as race 7 and kicks off an all-stakes pick four that has a guaranteed pool of $50,000. The Century Casino Oaks and Century Mile Handicap sandwich the Derby, which goes as race 9 and has a 7:50 p.m. Mountain post time.

Trainer Robertino Diodoro is looking for his fourth win in the Derby with Myopic, fifth if you count Chief Know It All, who was disqualified by a racing panel 10 months after the race was declared official.

Mopic makes his second start for Diodoro and will try to make amends for his loss as the heavy favorite to Uncharacteristic in the $100,000 Manitoba Derby on Aug. 2 at Assiniboia Downs. The Kentucky-bred son of Candy Ride went into the 1 1/8-mile race off a six-length win in a maiden special weight June 23 at Indiana Grand for trainer Rodolphe Brisset.

“I like him a lot and am excited about the Derby,” Diodoro said. “It was a rush job going into the Manitoba Derby, and we didn’t really know him. I think the lights bothered him, too. We’ve had him for a while now, and he’s coming into this in great shape.”

Myopic is lightly raced, with just five starts, and in his win in Indiana he set a moderate pace. He set a contested pace before tiring late in the Manitoba Derby.

Myopic will break from post 2 with Rico Walcott riding.

The Jim Brown-trained Tony’s Tapit has completely dominated the local 3-year-old division and being a horse that finishes with conviction, he has the right running style for the likely shape of the race. However, the pedigree on his dam’s side suggests he could have a hard time getting 1 1/4 miles.

“He’s by Tonalist, who beat California Chrome in the Belmont,” Brown said. “He’s a big, strong colt who loves to train and run. I think he will be fine with the distance.”

He will break from post 4 with Enrique Gonzalez riding.

Uncharacteristic has blossomed for trainer Robert VanOverschot. Last year, the veteran trainer claimed the Kentucky-bred son of Texas Wildcatter out of his second start for $8,000 on behalf of Adam Isfeld.

With Alex Marti aboard, Uncharacteristic rallied late to beat Myopic by 1 1/4 lengths in the Manitoba Derby, and there will be speed coming back to him Saturday.

All starters will carry 126 pounds.

The field for the Derby may be modest, but the one-mile Distaff drew a star-studded field of nine fillies and mares headed by Infinite Patience and Here’s Hannah, who are the co-highweights at 124 pounds.

Infinite Patience was the champion 2-year-old filly in Canada for trainer Barbara Heads in 2019 and never looked better winning her last two starts at Hastings by a combined 18 1/4 lengths.

Here’s Hannah will be making her first start away from Hastings, where the Grade 3 winner has compiled a 15-2-2 record from 19 starts for earnings of $438,265. The 6-year-old daughter of Numaany has not raced since she finished third in an open allowance race won by Solarity, who also has been entered by Heads.

Here’s Hannah has been training at Century with trainer David Nicholson, who takes over in the Distaff for John Morrison, Here’s Hannah’s conditioner for her entire career.

“She is not an easy horse to train, so I have a lot of respect for John Morrison,” Nicholson said. “It is a tough field, and she has not raced for a while. But she has trained well and seems to like it here.”

Here’s Hannah and Infinite Patience like to be involved early. If they get carried away early, the race could set up nicely for Princess of Cairo, who is coming off a four-length win in the $50,000 Emerald Distaff Handicap at Emerald Downs for trainer Glen Todd.

Raider, a half-sister to Infinite Patience, is a multiple stakes winner for trainer Greg Tracy.

Hidden Grace, a multiple stakes winner with $249,615 in earnings, comes into the Distaff off back-to-back romps at Assiniboia Downs.

Todd likes his chances with Princess of Cairo and is hoping for strong performances from Broad Approval in the 11-horse Oaks and Five Star General in the Mile, which drew 12 horses. With speed to run at, Broad Approval could get up in time in the 1 1/8-mile Oaks. In her last start, Broad Approval rallied to finish second in the $50,000 Washington Oaks on Aug. 29 at Emerald.

One of the horses Broad Approval will have to run down is the Craig Smith-trained Sheltered Bay, who is coming off back-to-back wins in the $50,250 Chariot Chaser on June 20 and the $49,250 Sonoma on Aug. 1.

Definite Pleasure also has speed, and the half-sister to Infinite Patience and Raider is trending in the right direction with a couple of sharp wins for Heads at Hastings.

Five Star General should be favored in the Mile. The 5-year-old horse by Distorted Humor is coming off a third-place finish Aug. 15 in the Grade 3 Longacres Mile, where his chances took a big hit when he went five wide around the first turn with Mario Gutierrez riding.

“Mario said he would have won for fun with a clean trip,” Todd said. “He is coming into this race better than ever and he should be right there.”

Five Star General can stalk and could get a nice trip from a forward position with Efren Hernandez riding.

With wins in his last two starts at Century in the $50,000 Journal and $50,000 Spangled Jimmy, the Tim Rycroft-trained Stone Carver heads the local contingent. However, the 6-year-old gelding by Birdstone has never won a race that was longer than seven furlongs and will be under considerable pressure as soon as he leaves the starting gate.

Explode, who won the first Canadian Derby at Century in 2019, could be dangerous from a stalking position