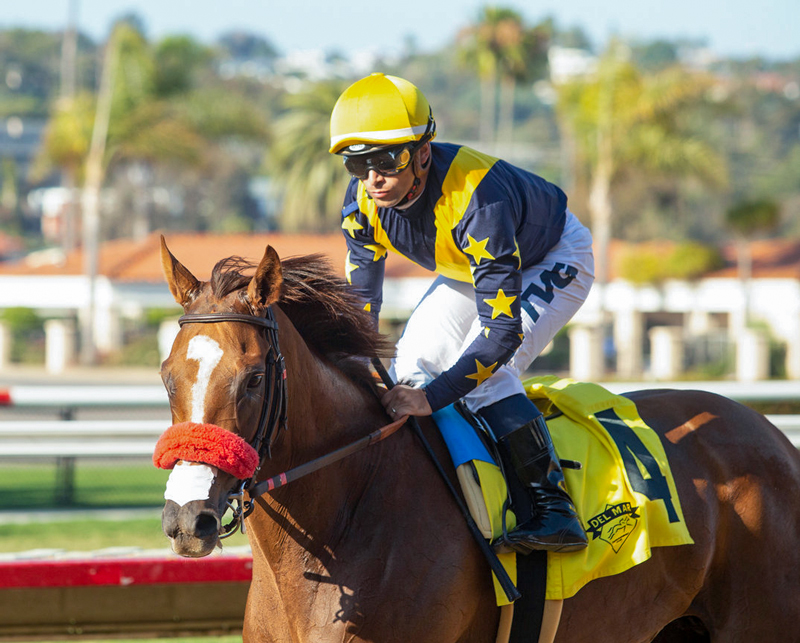 Del Mar will present a special Thanksgiving Day card on Thursday with a first post at 11 a.m. The eight-race program will finish at approximately 2:30 p.m., leaving plenty of time for fans to make it back home for a turkey dinner.

The day’s feature is the eighth local running of the Red Carpet Handicap, a marathon of a mile and three eighths that will be contested on the Jimmy Durante Turf Course. The Grade III test is for fillies and mares and has brought out five long-winded distaffers who’ll be shooting for the lionesses’ share of the $100,000 purse.

Three of the five runners have European backgrounds and one of them, L N J Foxwoods’ Luck, figures to go favored off her two sharp efforts this year since coming stateside. The 4-year-old daughter of the top American grass sire Kitten’s Joy smartly won an allowance race at Del Mar in August, then came back on October 2 in the Grade I Rodeo Drive Stakes at Santa Anita to just miss to the multiple-stakes winner Going to Vegas.

Luck, who previously had won twice in France from four starts, will be handled Thursday by leading rider Flavien Prat. She currently trains out of the barn of Hall of Fame conditioner Richard Mandella.

Here’s the full lineup for the headliner from the rail out with riders and weights:

Neige Blanche finished fourth in the Rodeo Drive in her most recent try. The French-bred 4-year-old by the Irish sire Anodin captured the CTT & TOC overnight handicap at Del Mar on August 14 at the same 11-furlong distance on grass as the Red Carpet. Earlier this year she won the Grade III Santa Barbara Sakes at a mile and one-half on the grass at Santa Anita.

England’s Rose comes into the affair off two straight wins, the most recent being the Swingtime overnight stakes at Santa Anita. Her previous victory was at a mile and three eights on the lawn at Del Mar on September 3.

Single Soul is in from the east coast to try her luck Thursday. She was an allowance winner at Belmont Park on October 22 in her most recent effort.

Nicest was a distant fourth in the Grade I Queen Elizabeth II Cup at Keeneland October 16 in her first U.S. outing. The 3-year-old by American Pharoah had been taking on stakes horses in England and Ireland prior to that.

The early Thanksgiving card will be the first of four days of racing going through Sunday, November 28 that will served as the climax to` the 2021 Bing Crosby Season. First post on the other three programs will be at 12:20 p.m