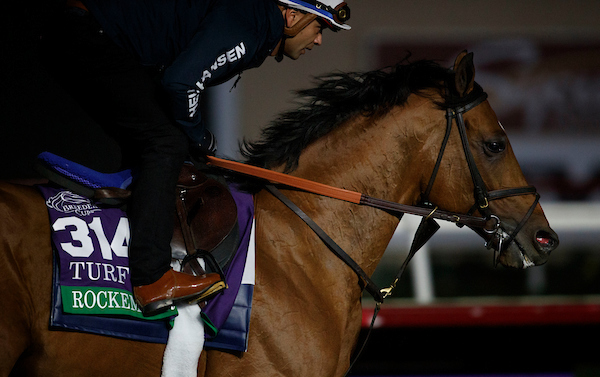 Madaket Stables, Wonder Stables, Dubb, Kisber and Caruso’s Rockemperor will go favored in Friday’s headliner at Del Mar – the $250,000 Hollywood Turf Cup – a Grade II crucible for 3-year-olds and up that has attracted seven long-winded competitors and will be contested at a testing mile and one half on the Jimmy Durant Turf Course.

The marathon will be run for the 40th time (the first 32 editions were conducted at now-closed Hollywood Park) on the holiday weekend nine-race card as the 7th Race and will reward its winner with $150,000.

Rockemperor, an Irish 5-year-old horse by the Danehill sire Holy Roman Emperor, comes into the headliner off a troubled trip in the $4 million Breeders’ Cup Turf at Del Mar on November 6. The bay horse could only finish eighth of 14 that afternoon but he’s been a steady sort throughout his career with 15 in-the-money placings in his 21 starts. He’s currently sporting a bankroll that reads $954,404 and either a first- or second-place finish Friday would make him a racing millionaire.

Rockemperor is trained by eastern kingpin Chad Brown, who has been a regular participant in the fall turf stakes at Del Mar in recent years and the conditioner has nabbed the saddle services of Del Mar’s leading rider, Flavien Prat, for the Friday journey.

Here’s the complete lineup for the feature from the rail out with riders and morning line odds:

Acclimate also ran in the BC Turf, but finished far back in the field. The 7-year-old gelding by California sire Acclamation is a seven-time winner of $633,872. He was beaten only a whisker in the mile and one-quarter John Henry Turf Cup at Santa Anita on October 2 in his race before his Breeders’ Cup try. He’s conditioned by Phil D’Amato.

Friar’s Road was just a nose behind Acclimate in the John Henry in his most recent attempt. The 4-year-old Quality Road colt works out of the barn of trainer Mike McCarthy and appears to have found a home running long on the grass.

Say the Word, a 6-year-old gelding by More Than Ready, has purse earnings of $672,792. He was a fast-closing third in the Hollywood Turf Cup last year. D’Amato trains him, also.

Astronaut was victorious in the Del Mar Handicap at 11 furlongs on turf on August 21. The 4-year-old colt is by Quality Road and races out of the barn of conditioner John Shirreffs.

Last year’s Hollywood Turf Cup was captured by Donegal Racing, Bulger and Coneway’s Arklow, who set a stakes record of 2:26.31 in the process.