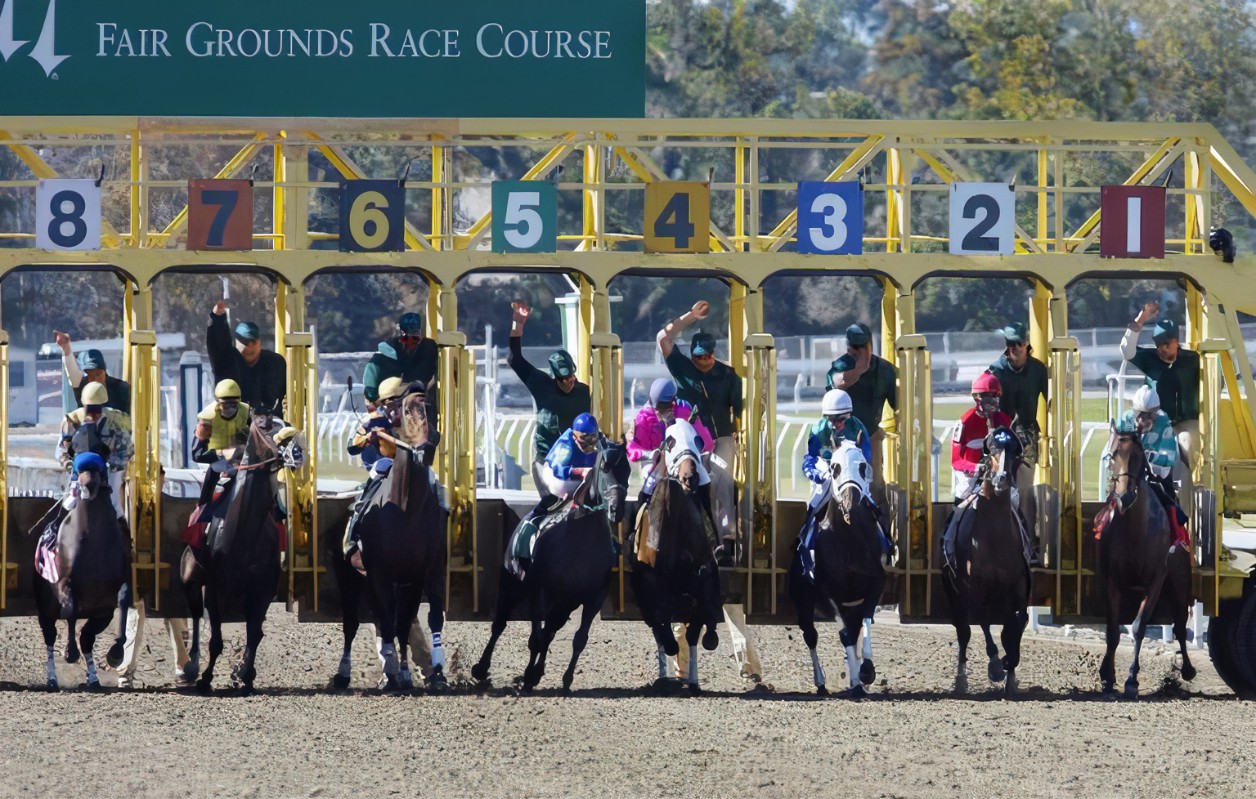 More Than Meets the Eye in Classy Thanksgiving Classic Showdown

New Orleans, LA (November 23, 2021) – Stop me if you’ve heard this one before: A Kentucky Derby router and a Breeder’s Cup turf sprinter walk into a New Orleans bar on Thanksgiving looking to hustle up a six furlong dirt score. The bartender gives a wink and a nod and says “See that gelding leaning up against the wall. He just came down from Remington Park. Prairie Meadows before that. He’s won his last nine and will race anybody as long as there’s money on the table.”

We see it again and again–class climber runs into a buzz saw of horses who have been facing our sport’s best. How much of a factor does class play in a horse race? Can a horse learn something from his hard-fought wins against lesser? On Thursday, November 25th at 3:12 CT we’ll have our answers in the 97th running of the $150,000 Thanksgiving Classic at Fair Grounds Race Course & Slots.

The joke could be on those who bet against him if Necker Island runs to his Kentucky Derby potential. He looked to be struggling when trying turf earlier this year, but both trips were troubled, setting up his backers for overlay scores in his next two races: dirt sprints at Churchill that resulted in career-best speed figures.

“The horse is having a good campaign,” trainer Chris Hartman said. “And I think we have finally found what he likes: sprinting.”

Earlier this month, he beat two game foes in Mucho and Sir Alfred James in the Bet On Sunshine at Churchill Downs. This son of Hard Spun has class and talent to spare, but he is being turned around in 19 days, similar to when he won an allowance race on June 6 and then entered the G2 Stephen Foster this summer, eventually finishing 11 lengths back from winner Maxfield.

“We’re a little bit short on time with this guy but he’s in pretty good form right now,” Hartman added. “His energy level is good, he’s carrying a lot of flesh, and he’s doing really good. We thought best to strike while the iron is hot. I think he’ll love that race track.”

When “ol’Necker” runs, as Hartman affectionately refers to him, you can’t help but admire his rhythm and swagger. This horse is class in motion. He’s the morning line favorite at a lukewarm 3-1. Breaking from rail, Mitchell Murril will be tasked with putting this first-run chestnut in position to eye down his foes late.

This near $700,000 earner has run his last three races at this distance and surface, but had only been entered in one dirt contest in his first 27 races. With seven graded stakes races under his belt, one of those being the Breeder’s Cup Turf Sprint, coming home in the G2 Phoenix at Keeneland he had the run to win his first.

“He was making a run to the eventual winner in the stretch,” trainer and owner Michelle Lovell said. “I was excited. I thought this horse was going to win this race.”

That would have been a victory against 2021 Breeders Cup winner Aloha West and entrant Special Reserve. And Mucho who Necker Island beat by a head last out. But he took a bad step.

“He just grabbed his quarter,” Lovell explained. He was very tender walking home. In the end, he hit the meaty part of the heel and tore the protective cover. It has healed up nicely. He had a really nice breeze last week, and he shipped down [to Fair Grounds] and he’s ready to roll. He better be because it is not an easy spot.”

We know he likes Fair Grounds, having posted his career-best speed figure here. Can his class carry him home? Lovell says he has more than classy company up his sleeves.

“He’s learned to fight harder this past year as he matured mentally,” Lovell said. “When I entered him in the dirt stakes at Colonial Downs, I was not sure if he could beat dirt horses. We’d beaten off the turf races but that was a big question. He answered and he did it in a head-and-head battle, nose-to-nose. The year before I don’t think he would have fought as hard. That’s just an example of when horses win, they get grittier–they grow up mentally and physically and they learn to give more.”

That brings us to the $10k claimer in the corner. The one who has stared down fifty-five horses in his last nine races and beaten them all. Greeley and Ben (7-2 ML). When he turns for home you can see his body beaming towards the finish line like a lion leaping for its prey. He can win out front or from off the pace, and his last race was his first foray into stakes company. He won by 2 ½ running 3 to 4 wide throughout. This seven-year-old gelding out of Greeley’s Conquest has sixteen wins and a half million in purses to show for it. Out of 17 races the past two years, he only finished out of the money once and it was his lone two-turn try. But does Remington Park and Prairie Meadows form transfer to Fair Grounds?

“I’d like to have been able to run this horse [Necker Island] in starter races,” Hartman said. “I think he’d win 12 in a row, too.”

But wait, more competition just walked in.  Winner of three out of the last five Thanksgiving Classics, New Orleans native Al Stall Jr. sends the powerful closer Pyron (6-1 ML) to battle from gate 2. Declan Carroll gets the mount after the passing of longtime Fair Grounds rider and friend to all, Miguel Mena. Four wins out of seven tries at this distance, this Candy Ride chestnut likely needs these horses to duel early and fade in order to have a chance.

Watch how this race shapes up early–if Louie Roussel’s Went West (8-1 ML) can break from gate 3 and get to the rail, where he does his best running, he might very well bulldoze the field. But this is a newcomer to the colony, Jareth Loveberry’s, first time up.

He’ll have to pass another out-classed underdog, Emerald Forest (8-1). The connections claimed this Gemologist gelding out of a $15k claiming race here at Fair Grounds last February. With the blinkers off, he will likely be passed early by the speed to his outside, Strike Power (4-1 ML). This son of Speightstown trained by Steven Asmussen won the G3 Swale, placed in the G2 Fountain of Youth but then faltered against the better in the G1 Florida Derby and did not earn enough points for a spot in the 2018 Kentucky Derby. Deshaun Parker will have this five-year-old breaking quick out of the 6th gate, but will he save enough for the real running at the end?

The Thanksgiving Classic matches extremely talented horses at the top of their game and finally running on their preferred distance and surface. What will set them apart will be exactly what will be on display in what sets up to be a thrilling stretch run.

“You’ve got a lot of fit and sound horses that impress you in the morning, but when it comes to being eyeballed by a horse that can run as good as them they just cave, they just falter because they don’t have the heart, the guts for the fight,” Lovell said. “It separates the boys from the men.”

It will be a hard fought race between talented horses, but it just might come down to who has more guts for the fight.