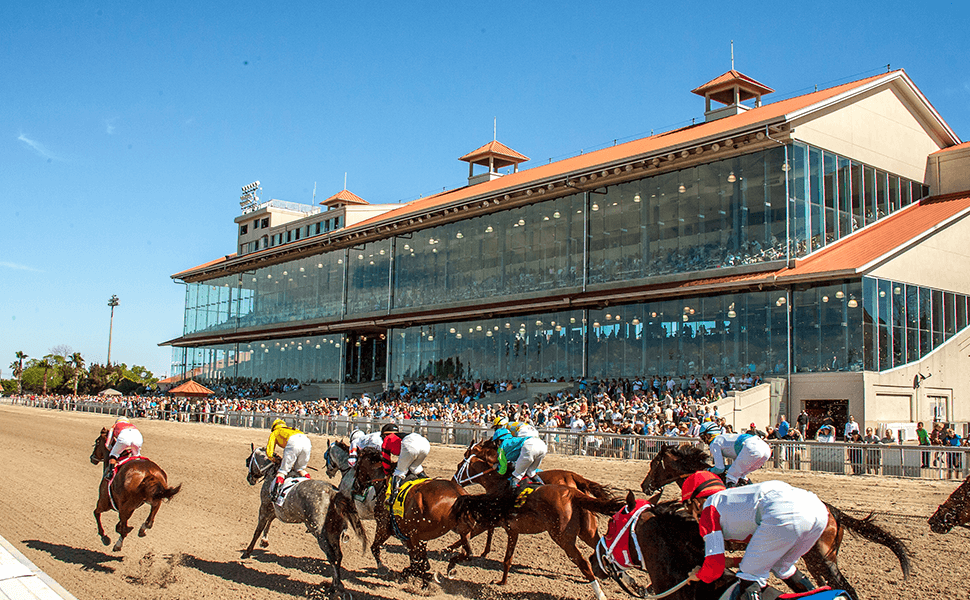 New Orleans (November 20, 2021) – Like turkey and cranberries, Hartman and Murrill, Amoss and Graham, Derby Day and hats, Mardi Gras and masks–some things traditionally just go best together. This couldn’t be more true than at Fair Grounds Race Course & Slots, where for many of the 150 years, opening day has combined horse racing with Thanksgiving. In true New Orleans fashion, it is an assemblage of all the best combinations. And also some new ones. After a year of no spectators, the season kicks off with a lot of buzz around full barns, new jockeys, returning champion connections, and the addition of seven new stakes races.

Ron Faucheux, who earned his first local crown last season, and three-time champion jockey James Graham return to defend their titles over the 80 days of racing, scheduled between November 25, 2021 and March 27th, 2022. They will have targets on their backs as the usual suspects and some newcomers show up to vie for the crown. At the helm of one of the country’s premier barns, four-time Fair Grounds champion Brad Cox will have something to say about who wins this year’s title.  Steven Asmussen, North America’s all-time leading trainer by wins, returns as well as perennial contender, Thomas Amoss. Cox, Asmussen, and Amoss will surely be peppering in 2-year-olds to watch and 3-year-olds to compete in the Road to Derby Races — the newly coined Gun Runner (Dec. 26th), Grade III Lecomte (Jan. 22nd), Grade II Risen Star (February 19th), and the Grade II Louisiana Derby (March 26).

Some exciting barns with larger-than-normal presences include Michael Maker, Brendan Walsh, and Mark Casse. Joe Sharp’s and Michael Stidham’s stalls will be flush as well.

Jockey newcomers include Jareth Loveberry who had a 30% win rate during the 2021 Arlington meet. He has won multiple riding titles at Arlington and Canterbury, and looking at his mounts for opening day, top trainers are excited to employ his services. Also, Reylu Gutierrez, in the midst of a career-year by purses earned, descends upon New Orleans ready to show the world why he is ready to take his game to the next level.

The opening card is drawn and the fields are big. The card averages over nine horses in each of the nine races. Beginning with a pair of Louisiana-bred races filled with horses who have taken a recent break, there will definitely be value on the board. From there the competitive fields are filled out with many horses who spent the fall at Keeneland and Churchill Downs. One two-year-old to watch is Godolphin-owned and Stidham-trained, Walhalla. Ridden by Murrill last out, Walhalla showed his early speed and will to win, fighting back after being passed to lose by ½ length in a nine furlong, maiden special weight race at Keeneland.

The 97th running of the Thanksgiving Classic is slotted 7th on the card with a post time of 3:12 CT. Pay attention to the class differences between the three main contenders: Just Might, Necker Island, and Greely and Ben. Just Might has spent a lot of his career facing graded-company, the pinnacle of that being his start in the 2020 Breeders Cup Sprint. Necker Island has had a solid 4-year-old campaign after his 3-year-old highlight of racing in the 146th running of the Kentucky Derby. But class-climber Greely and Ben comes in as hot as you will find a horse. Winner of nine races in a row, 11 out of 14 this year, Reylu Gutierrez will take his first mount on this Karl Broberg trained gelding, and his speed figures say he will be in the photo at the end.

Thanksgiving this year also heralds the first running of the Joseph R. Peluso Memorial Stakes, named for the longtime racing official who passed away last year. Firing on the turf course after the Thanksgiving Classic, this $75,000 purse will be hotly contested by as evenly-matched field of 11 horses as you will find.

The 80-day, 2021-2022 Fair Grounds racing season runs through Sunday, March 27. Regular post time will be 1:05 p.m. CT, but there will be an earlier noon CT first post on Thanksgiving Day (Nov. 25), Louisiana Champions Day (Dec. 11), Road to the Derby Kickoff Day (Dec. 26), Road to the Derby Day (Jan. 22) Louisiana Derby Preview Day (Feb. 19) and Louisiana Derby Day (March 26). There will be over $7 million in stakes races, highlighted by the March 26, $1 million Twinspires.com Louisiana Derby. A complete list of the stakes schedule can be found here:

Fair Grounds Race Course & Slots, one of the nation’s oldest racetracks, has been in operation since 1872. Located in New Orleans, LA, Fair Grounds, which is owned by Churchill Downs Incorporated (NASDAQ Global Select Market: CHDN), also operates a slot-machine gaming facility and 15 off-track betting parlors throughout Southeast Louisiana. The 150th Thoroughbred Racing Season – highlighted by the 109th running of the Louisiana Derby – will run from November 25, 2021 through March 27, 2022. More information is available online at www.fairgroundsracecourse.com.