Last after the first half mile but only about four lengths off the lead, Warren’s Showtime, who was shortening up out of five consecutive turf miles, loomed ominously as the field made the dirt crossing at the top of the lane and sliced her way through traffic in what was to become her seventh career stakes victory.

“I wasn’t confident when I saw the first quarter, but I could see Juan was confident, so that gave me some hope,” said Lewis, who also conditioned millionaire Clubhouse Ride and Warren’s Showtime’s Grade I winning dam, Warren’s Veneda.  “(It) made me think maybe.  Once she got into gear, I knew she’d get there…Another Clubhouse Ride, they just run.”

“I knew the pace wasn’t that fast, but she was in the bridle and pulling,” said Hernandez, who has been aboard for her last nine races.  “That’s the way she likes to run and she came with a big run today.  She’s a nice filly, very consistent.”

The Warrens, who came in from their Las Vegas base to watch today’s Distaff, were understandably elated with their homebred star.

“It’s just been unbelievable and (Ben) has had so many horses, but not one that has been so consistent as ‘Showtime,’” said Sally Warren.  “We were just saying, 19 out of 21 starts and she’s hit the board and that’s unbelievable…We are really, really thankful.  Craig picked her out at the farm, now we know (why).”

Although it was expected that speedy Anna Fantastic would make the early lead, most observers felt she’d be pressed by eventual favorite Bella Vita through quick early splits, but with Bella Vita taking a more conservative approach, moderate hillside fractions of 22.90, 45.99 and 1:08.14 resulted and it was Sedamar, who was second to the dirt crossing, who prevailed for the place by a half length over Anna Fantastic.

Anna Fantastic, off at 4-1 with Edwin Maldonado up, paid $3.60 to show while finishing 2 ¼ lengths clear of even money favorite Bella Vita.

The California Distaff Handicap is part of the lucrative CTBA sponsored Golden State Series for eligible California-bred or sired fillies and mares three and up.

The Distaff marked win number two on the day with two races remaining for Hernandez, giving him 10 for the meet–five  back of Flavien Prat, who has 15 wins through nine racing days.

First post time for a nine-race card on Sunday is at 1 p.m.

Loud Mouth, fresh and fit after being promoted to victory in the E. B. Johnston Stakes at Los Alamitos on Sept. 12, his first race in three months, returns to turf in Sunday’s $100,000 California Flag Handicap at about 6 ½ furlongs.

“He’s got plenty of speed for Abel (Cedillo) to come out of the gate and place the horse where he wants,” Knapp said. “The horse is doing very well right now. He had a three-month rest because he needed it. Now he’s starting to come around again.”

“Ron’s been with me for three or four years and we’ve done well together,” Knapp said. “He’s got nine horses with me now.”

Neptune’s Storm, a versatile son of prolific turf sire Stormy Atlantic, returns to a distance he fancies–one mile on grass–in next Saturday’s $70,000 Lure Stakes for three-year-olds and up.

The bay gelding is coming off an eventful ninth-place finish in the Grade II John Henry Turf Championship at a mile and a quarter, the longest route ever attempted in his 23 career starts.

“A mile is a better distance for him,” said trainer Peter Miller, alluding to the tractable campaigner’s record of five wins, one second and one third over that venue.

Leading rider Flavien Prat, who won the restricted Wickerr Stakes on Neptune’s Storm at a mile on Del Mar’s turf course July 18, will be back aboard.

“He’s a nice horse that tries hard,” said Miller, who has had Neptune’s Storm for his last four races, the gelding having previously been trained by Richard Baltas and earlier Bill Morey.

CHRB MEETINGS TO BE HELD THIS WEEK

Consistent with Governor Gavin Newsom’s Executive Order N-29-20, these meetings will be teleconference only. No physical locations will be provided. The public may participate in either of two ways. The webcast audio link on the CHRB website will continue to provide a way for the public to listen to these meetings. Those wishing to speak during the meetings may dial 888-392-4564 and enter 6896291# to join the teleconference.

To speak on any item, press star 1 to enter the speakers’ queue. Those providing unsolicited public comment on individual agenda items are limited to two minutes. Comments must relate specifically to the agenda items. Note that for the Board agenda item #8 and the Committee agenda item #2, Public Comment, no further comments will be permitted after 30 minutes. 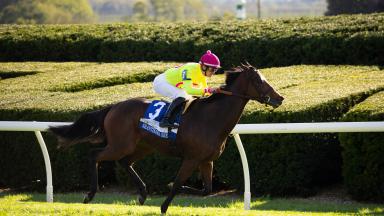 Trained by Chad Brown and ridden by Flavien Prat, Shantisara covered the 1 1/8 miles on a turf course rated as yielding in 1:48.86. The win gave Brown his record fourth victory in the race following Dayatthespa (2012), Rushing Fall (2018) and Cambier Parc (2019) to break a tie he held with Jimmy Toner and John Veitch.

Today is the second Saturday in a row that Brown has run 1-2 in a Grade 1 race at Keeneland. In the First Lady Presented by UK HealthCare, Blowout (GB) and Regal Glory provided owner Peter Brant and Brown with the exacta.

Technical Analysis led the field of nine through fractions of :23.91, :48.63 and 1:12.78 while under mild pressure from favored Empress Josephine (IRE) with Shantisara and Burning Ambition tracking as a joint third.

As the field turned for home, Prat went right on the attack and wasted little time wresting control and erasing any doubt of the outcome. Shantisara’s margin of victory is the largest in the history of the race, eclipsing the 4½-length victory by Hot Cha Cha in 2009.

Since joining Brown’s barn in the spring from Europe, Shantisara has won three of four starts with stakes victories coming in the Pucker Up (G3) at Arlington Park and the Jockey Club Oaks Invitational at Belmont Park.

It was another 2¼ lengths back to Nicest (IRE) with Queen Goddess, Closing Remarks, Cloudy Dawn (IRE), Flippant and Empress Josephine following in order. Lady Speightspeare was scratched.

A high-quality and well-set-up ultrasound image can mean the difference between an accurate or missed diagnosis in equine practice. A high-quality and well-set-up ultrasound image can make the difference between an accurate or missed diagnosis. While traditional ultrasound scans are performed with the horse’s limb weight-bearing, non-weight-bearing techniques can offer additional insight into tissue pathologies (disease or damage). So Alison Fairburn, BVSc, Dipl. ACVDI-LA, MRCVS, of Bell Equine Veterinary Clinic, in Kent, offered tips for veterinarians performing non-weight-bearing or dynamic (moving) ultrasound during a presentation at the 2021 British Equine Veterinary Association Congress, held Sept. 4-7 virtually and in Birmingham.

Veterinarians can take non-weight-bearing ultrasounds of horses’ lower limbs with the foot elevated in a Hickman block (a hoof positioning block used for imaging), with someone holding the limb in a flexed position, or with the limb (usually a hind limb) resting on its toe. Most horses require sedation to remain still during these procedures.

Veterinarians can perform off-incidence ultrasound (when the beam is not at 90 degrees) with the horse weight-bearing or non-weight-bearing. The technique involves placing the probe over the affected area at a normal angle, or incidence, then dropping the tail of the probe by a few degrees until the tendon or ligament goes black on the screen, Fairburn explained.

“It’s useful for delineating the margins of structures and identifying chronic injuries, because scar tissue will remain white when you go off-incidence,” she said.

Veterinarians have two types of Doppler ultrasound at their disposal: color and power. They both offer information about the speed and direction of blood flow, with power Doppler providing greater detail.

“Broadly, they’re just telling us about blood flow in tendon and ligament tissue,” said Fairburn, which can help veterinarians identify areas of pathology and assess healing over time. “Hypervascularity occurs in the normal healing process, so we see an increase in blood flow that tails off as healing progresses. It normally lasts three to six months after injury.”

While normal, healthy tissue doesn’t typically show blood flow, Fairburn cautioned that you can detect it immediately after exercise. “So if I’m thinking about using Doppler, I’ll wait a while after the horse exercises.”

Veterinarians should perform Doppler ultrasound in non-weight-bearing limbs and optimize the machine for low-flow velocity, she said, adding that they should take care not to press so hard on the tissue that they compress the blood flow themselves, she added.

This procedure, also done non-weight-bearing, allows veterinarians to examine a region of the limb during flexion and extension and assess relative movements of the structures. Fairburn said she most commonly performs dynamic ultrasound when imaging the digital flexor tendon sheath.

Non-weight-bearing and dynamic ultrasound can provide practitioners with greater details about lesions they’ve already identified and allow them to identify lesions they haven’t identified previously. Fairburn said these techniques are relatively easy to do and require no extra equipment compared to weight-bearing ultrasound—just practice.

Alexandra Beckstett, Managing Editor of The Horse and a native of Houston, Texas, is a lifelong horse owner who has shown successfully on the national hunter/jumper circuit and dabbled in hunter breeding. After graduating from Duke University, she joined Blood-Horse Publications as Assistant Editor of its book division, Eclipse Press, before joining The Horse. 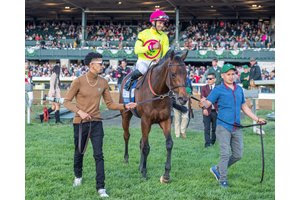